Sometimes I feel as if my life is just one long list of fails.

Intellectually, I know this isn’t true.  I mean, I’ve seen “It’s A Wonderful Life”.  I know that I have done good in the world.  But some days it’s so hard to FEEL that it’s true.

For every one thing I cross off my list, three more appear.  I started to say “feels like” but truly, every time I see the end of the tunnel, a load of new stuff falls in my lap. 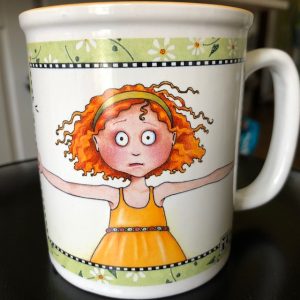 Like Sisyphus, I carry my giant boulder to the top of the hill and, for a split second, I feel that “well done!” rush of joy. Then I watch as the beastly rock tips, and rolls right back to the bottom.

There is a mug above the sink where we do dishes.  The Mary Englebreit illustration is of a flustered little girl, her red hair flying every which way, and her eyes wide as if in horror.    The caption on the other side is : “Life is just so … Daily.”

Me.  That illustration is me.

Well, except that my hair was never red and is mostly gray now and…. Anyway!  That little girl looks how I feel when I sit down at my computer, pull up my “To Do” list and discover it’s longer today than it was yesterday.

I told you in yesterday’s post that one powerful solution was to change the name of the list. Doing that really did change my approach to my daily tasks.  But the most powerful thing I did?

And THAT  solution has changed my approach to my life.

I have used to-do lists for as long as I can remember.  My organized mother made sure her ADD daughter mastered that tool early on. My lists have had various incarnations, as well. Handwritten at first (I’m old, I know.) with check marks beside. Then I started slashing the entire task  through when it was done.  (SO satisfying!) 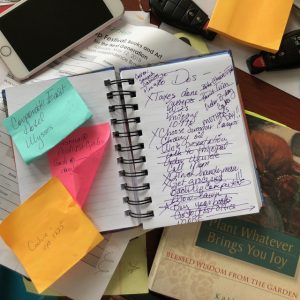 Eventually, the lists moved to the computer and then to my phone. And in that transition I made one fatal mistake.  I started deleting the “done” stuff.

Every time I looked at that list, all I saw was the stuff to do. No mention whatsoever of what I had accomplished.  Thus, my “To-Do” list went from useful tool to accusatory anchor around my neck.  It got a little better a couple of years ago when a friend suggested that I put a big fat “X” next to the “Done” stuff and just transfer it to the bottom. I LOVED the big fat “X”, but how often did I actually look through that list?

Then I had an epiphany. What if I put the “done” list at the top?  Then every time I opened the document I would have this amazing list of stuff I’ve done staring me in the face.  On the days when I’m feeling accomplished, it just adds to my joy.  On the days when I feel like a failure?

On those days, scrolling down through those pages of “Done” reminds me: No matter how I feel at this moment; no matter how long I think my list of fails is, I have a pretty darn long list of wins also.