(Warning: This is a long post.  About double the normal length if you have something else you need to be doing. I tried to cut it down, really I did, but every step was pretty crucial!)

Nine Steps to Doing the Impossible

I am not one for large, physically challenging projects.  And yet, somehow, I get myself involved in them ALL  THE TIME!

This happens because I am an infernal optimist.  I take on projects that other people balk at, cheerfully proclaim them doable, then procrastinate my tail off once I realize exactly what I’ve gotten myself into.

Thus the insane paver project of 2018.

If you’ve been reading along, you know all about the four and a half tons of pavers my family and I moved last weekend.  (Nine tons, really, if you consider that we moved them twice!)

So in case you are facing something that feels impossible right now, I thought I would share the steps that helped us through our behemoth brick ballyhoo.

Step One: Decide If It’s Worth It.

We bought these bricks in December.  They have been sitting 26 miles away all this time.  It was very tempting to just call the owner, forfeit our 500 bucks and have her sell them to the next person in line.

So just to remind myself why I got us into this, I looked the pavers up online.  One pallet (126 pavers) was $1,199 new. And she had sold us four pallets.

And I really needed to know that before I paid for a truck, lost an entire weekend, and forced my children into slave labor.  Motivation on a huge project is key. Half-hearted only gets you half done.

Yes, I know I say this all the time.  But even though this is my own mantra, I forget it, too. It’s so easy to just keep putting off that difficult thing.

In this case, we didn’t have a truck until three in the afternoon.  It would have been REALLY easy to say, “Let’s just wait.” But I knew that if we just pushed through, we would be glad we did.

My team is kind of built-in: Two teen-age boys, a husky ten-year-old, and a husband who is no stranger to heavy labor. There is a reason the old saying exists:  “Many hands make light work.”

I could have done this on my own, but it would have taken several weekends and WAY too much time.  (And I would also have been resentful at the end of it.)  By asking for help, the work went really fast, turned out to be kind of fun, and created some awesome memories for all of us!

We talked about multiple options for moving these pavers.  Borrow a friends truck; rent a trailer to pull behind the van; take both vans and fill them multiple times. 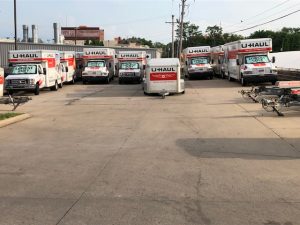 In the end, we decided it made more sense to rent something that could hold them all and not waste time going back and forth all day.  Even using both vans, my guess is it would have taken four trips.  That would have made us all miserable.

By renting a truck, we were not only able to make one trip,  but we had time to take breaks as needed during the process.  Plus, we were never tempted to knock off and “finish tomorrow”.  The money spent was well worth it!

It is so easy to “make do” when it comes to the tools we need to get a job done.  But investing in the right tools will always pay for itself!

Even before we left to pick up the truck, I made it very clear that I intended for this to be as relaxed and easy a project as possible.  I planned to take a couple or three breaks to go get lime-aides or ice cream, just to let ourselves rest and not burn ourselves out. 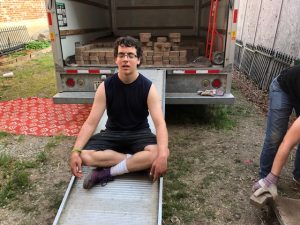 We knocked off at about the half-way mark, tired and headed toward cranky.  But half an hour of sitting in the shade slurping lime-aides and laughing at each others’ stories refreshed both our bodies and our attitudes.  We were all smiling again when we got back in the van, and when we returned, the work went much faster

Which goes hand in hand with:

Each of the pavers weighed eight pounds.  That doesn’t seem like much, and at first the boys wanted to carry four or five at a time.  After only a few trips, though, they figured out that they were wearing themselves out.  When they dropped down to two bricks at a time, the work became easy and actually felt like it was going faster!

I am guilty of this also.  I load myself up with scads of work in the hopes of moving faster, but in reality, I’m just wearing myself out and falling further behind.

Little by little I am learning to carry only that which is absolutely necessary.  I am learning to be strategic in what I work on, to honor my body and my endurance, and to recognize that by carrying a lighter load, I can actually move faster and be more productive.

Oohhh! This is such a hard one!

I am that girl that always kept up with the boys.  I lifted weights in high school and prided myself on squatting as much as most of the guys.  But age and injury demand that I no longer play “keep up” when it comes to physical labor. 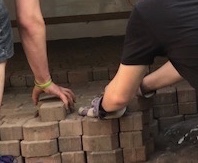 While my boys and husband were carrying two pavers back and forth to the truck, I had to limit myself to one.  And when my hands and shoulder started to hurt, I limited myself to the task of sweeping the dirt off the piles before they were loaded.  It was frustrating!!

But with this much work to do, I could not risk taking myself out of the game.

So I gritted my teeth and did what I could while my boys and husband outworked me two or three to one.

But the next day I was able to keep working.  I was still useful.  Because I chose not to compare myself to others, I was able to be part of getting the job done!

Step Eight: Be Safe Rather Than Swift.

A trip to the hospital would have raised the price of those pavers right back to retail!

So I just kept repeating: “Take your time. Stay aware of what you’re doing. Getting this done safely is more important than getting it done fast.”

Sometimes we can get so focused on a goal that we begin to take unhealthy risks, either with our body or our bottom line. But moving fast is not worth it if the cost is our health, our relationships or our retirement.

Besides planning in rest breaks, I also made sure my crew knew we would be celebrating afterward.  We have a favorite Indian restaurant that we all love, so I made sure the team knew that that would be the final reward for their efforts.

Food is always a powerful motivator for teen-age boys! 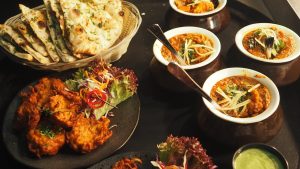 We could have promised them Taco Bell or Sonic, but there’s something about a sit-down meal in a nice restaurant that makes it truly feel like a celebration.

Because that’s what it was!

We worked HARD for those two days. We accomplished a lot! By taking the time and putting out the effort to make that meal really special, we honored the work our team put in. 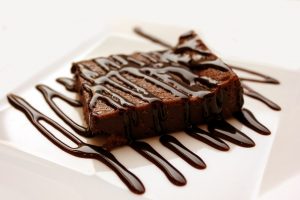 And this is what I’ve learned about myself, as well.  When I work hard and hit a goal I’ve set, I absolutely must celebrate. That celebration of myself and what I’ve accomplished is key to getting in there and doing it all over again the next time!

While I would love to think that I have learned my lesson and that I will never get myself and my family into a project like this again, I know better.  The eternal infernal optimist in me will once again set herself (or her family) up for some amazing deal. But that’s okay.

Because we already know how to do the impossible.

Indian Food:Photo by Chan Walrus from Pexels
Brownie: Photo by Twenty-twenty through Pixels